Makeup by Mario Citrine Master Crystal ReflectorMakeup by Mario Citrine Master Crystal Reflector ($24.00 for 0.12 oz.) is a light-medium gold with moderate, warm yellow undertones and flecks of light and medium gold and copper sparkles throughout paired with more of a transparent base that gave skin a slight sheen. It was a more “glittery” highlight (though it did not contain any plastic glitter!) and was more sparkles than it was underlying pigment. When worn at higher coverage, it was intensely sparkly and appeared yellower in tone against my skin.

When the light reflects off of the highlight, it can be incredibly intense–shiny, twinkling, and generally beaming-from-space kind of glow–but sometimes, when the light doesn’t reflect, it can look more speckled and dirt-like due to the larger particle sizes that sit on top of skin more noticeably. It had sheer coverage, which was as described, and could be built up to more semi-opaque coverage with two or three layers.

It applied best with fingertips, which was how application was described (even for sheerer coverage!), as it gave better precision and spread the product with more control than when used with a brush. That being sad, a small, precise fan brush was great for applying and gently dispersing the product over a blush. The texture was slightly firmer and somewhat drier to the touch, and I think more slip or glide would have helped the formula out. It lasted for eight hours on eyes and cheeks, but there was moderate fallout when worn as a topper over eyeshadow and light migration when worn as a cheek highlighter.

FURTHER READING: Formula Overview for details on general performance and characteristics (like scent).

It’s supposed to be a “subtle and sheer” highlighter that is “buildable” and creates a “veil of crystal sparkle.” It’s a thinner, moderately-dense powder highlighter that is more sparkle/micro-glitter (though no plastic or PET glitter!) with more of a transparent to tinted base. They seemed a touch dry–not as inherent adhesion as one probably would want for something this packed with sparkle–so fallout and migration were issues.

They were sheer to semi-sheer when applied with a brush or gently with a fingertip–the brand actually recommended using a fingertip for both a “sheer wash of sparkle” as well as for a more intense, “spotlight effect.” I found that a brush resulted in more diffused, less precise application and sheerer coverage. A fingertip gave more semi-sheer to medium, buildable coverage that was easier to apply just where I wanted it.

When I applied the product to my cheeks as a highlighter, they wore between eight and nine hours with light migration movement. When I tried it on the lid/brow bone, there was more noticeable fallout over time.

Browse all of our Makeup by Mario Master Crystal Reflector swatches. 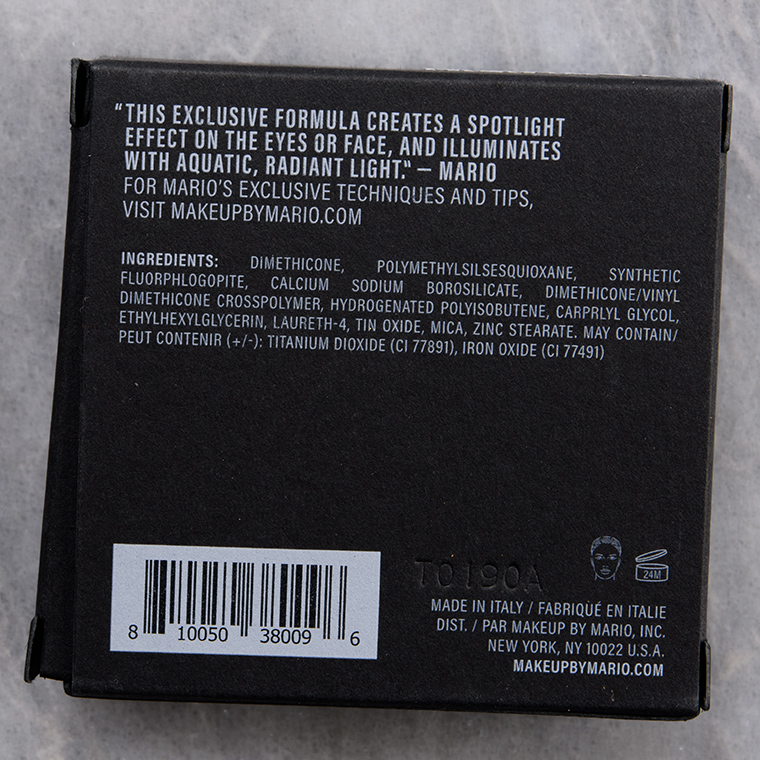 We hope you’ll consider supporting Temptalia by shopping through our links below. Thanks!

Leave a reply Click here to cancel the reply

We're not around right now. But you can send us an email and we'll get back to you, asap.